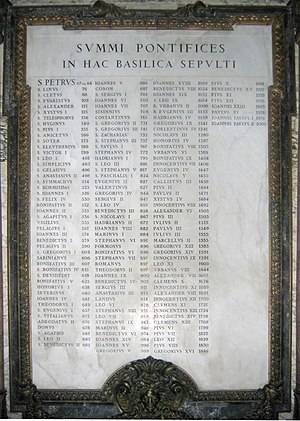 A papal name is a special name (regnal name) which is chosen by the pope when he is elected.[1]

In the early church, popes were known by their ordinary names, such as Pope Adeodatus, Pope Formosus and Pope Hyginus.[1]

The practice of choosing a papal name started in the sixth century. At birth, Pope John II was named after the Roman god Mercury. When he was elected pope, he chose to be called by a Christian name.[1]

Papal names became customary in the 10th century. In 996, the first German pope was chosen; and he changed his name from Bruno to Gregory. He is known as Pope Gregory V.[1]

Every pope since the 16th century is known by a different name than the one he was given at birth.[2]

The first papal name to be repeated was Pope Sixtus. There have been four others.[3]

As with kings and emperors, a Roman numeral is added if the Pope chooses a name that another pope has used before[3] -- for example, Pope John Paul II decided to be known by the same name as the pope who came before him.

Emblem of the Holy See.