List of territorial entities where English is an official language 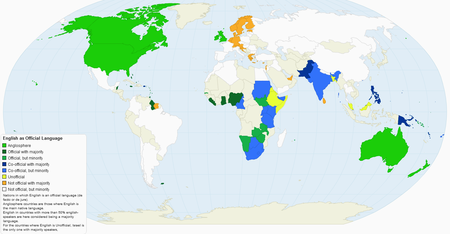 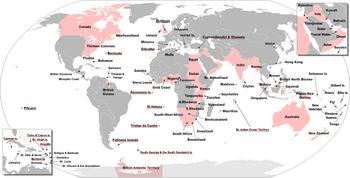 All areas of the world that were ever part of the British Empire. Current British Overseas Territories have their names underlined in red.

India's linguistic picture is complex. According to the Constitution of India, "Hindi in the Devanagari script" is the official language of the union;[1] and English the 'subsidiary official language';[2] however, English is mandated (must be used) for the authoritative texts of all federal laws and Supreme Court decisions and (with Hindi) is one of the two languages of the Indian Parliament. English is taught in schools, and the quality and effectiveness of the teaching is extremely varied.[3] English is used almost exclusively for higher education.

The linguistic makeup of Pakistan is also complex. While the national language is Urdu, English is an official language and used in business, government and law.[4]

In these country subdivisions, English has de jure official status, but English is not official in their relevant countries at the national level.

^1  The population figures are based on the sources in List of countries by population, with information as of 23 January 2009 (UN estimates, et al.).
^2 Hong Kong is a former British Crown colony (1843-1981) and British Dependent Territory (1981-1997); it is currently a Special Administrative Region of the People's Republic of China (1997- present)
^3 Puerto Rico is, historically and culturally, connected to the Spanish-speaking Caribbean; Spanish is also an official language on the island. Puerto Rico is an unincorporated United States territory referred to as a "Commonwealth"
^4 Guam is an organized unincorporated territory of the United States
^5 The US Virgin Islands is an insular area of the United States
^6 Jersey is a British Crown dependency
^7 The Northern Mariana Islands is a commonwealth in political union with the United States
^8 Isle of Man is a British Crown dependency
^9 Bermuda is a British Overseas Territory
^10 Guernsey is a British Crown dependency
^11 American Samoa is an unincorporated U.S. territory
^12 Christmas Island is an external territory of Australia
^13 Pitcairn Islands is a British Overseas Territory
^14 The Cook Islands and Niue are associated states of New Zealand that are not really known.
^16 Cocos (Keeling) Islands is an external territory of Australia