The United States of America (USA), commonly referred to as the United States (US), or America is a country in North America. It is made up of 50 states, a federal district, and five territories. It is one of the world's superpowers. It is famous for its influence over finance, trade, culture, military, politics, and technology.

The executive branch is the part of the government that enforces the law. Members of the U.S. Electoral College elect a president who is the leader of the executive branch, as well as the leader of the armed forces. The president decides whether or not the bills that the Legislative branch passes will become laws, and the president may veto a bill. The President may also make "executive orders" to ensure that people follow the law. Two of the most famous executive orders were President Abraham Lincoln's Emancipation Proclamation and President Dwight D. Eisenhower's order to send soldiers to allow the Little Rock Nine into a school. 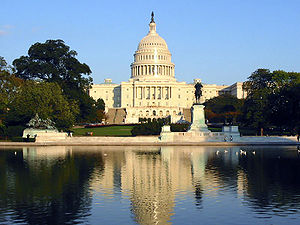 Representatives and senators propose laws, called "bills", in their respective houses. A bill may be voted upon by the entire house right away or may first go to a small group of members of that house, known as a committee, which may recommend a bill for a vote by the whole house. If one house votes to pass a bill, the bill then gets sent to the other house; if both houses vote for it, it is then sent to the president, who may sign the bill into law or veto it. If the president vetoes the bill, it is sent back to Congress. If Congress votes again and passes the bill with at least a two-thirds majority, the bill becomes law and cannot be vetoed by the president.

Under the American system of federalism, Congress may not make laws that directly control the states; instead, Congress may use the promise of federal funds, or special circumstances such as national emergencies, to encourage the states to follow federal law. This system is both complex and unique.

The Judicial Branch is the part of government that interprets what the law means. The Judicial Branch is made up of the Supreme Court and many lower courts. If the Supreme Court decides that a law is not allowed by the Constitution, the law is said to be "struck down" and is no longer a valid law. The Supreme Court is made up of nine judges, called justices, who are nominated by the President and confirmed by the Senate. One of these justices, called the chief justice, heads the court. A Supreme Court justice serves until he or she dies or resigns (quits in the middle of his or her term). When that happens, the president nominates someone new to replace the justice who left. If the Senate agrees with that choice, the person becomes a justice. If the Senate does not agree with the president's choice, then the president must nominate someone else.

Famous court cases such as Marbury v. Madison (which was decided in 1803) have firmly established that the Supreme Court is the ultimate interpreter of the United States Constitution and has the power to strike down any law that conflicts with it.[10] 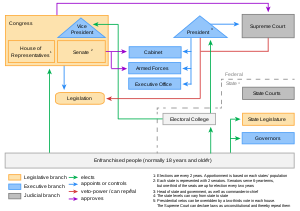 The political system of the United States

The United States of America consists of 50 states, 5 territories and 1 district (Washington D.C.). States can make laws about things inside the state, but federal law is usually about things dealing with more than one state or dealing with other countries. In some areas, if the federal government makes laws that say different things from the state laws, people must follow the federal law because the state law is not a law any more. Each state has a constitution of its own, different from the federal (national) Constitution. Each of these is like the federal Constitution because they say how each state's government is set up, but some also talk about specific laws.

The federal and most state governments are dominated by two political parties: the Republicans and the Democrats. There are also many smaller parties; the largest of these are the Libertarian Party and the Green Party. People give money to political campaigns that they like, and try to persuade politicians to help them. This is called lobbying. All Americans are allowed to lobby the government, but some have and spend more money than others, or in other ways do more in politics. Some people think this is a problem, and want rules to be made to change it.

Since 2009, the president is a Democrat, so Democrats have slightly more power in the federal government. However, there are still many powerful Republicans who can try to stop the Democrats from doing things that they believe will be bad for the country. Also, the Democrats do not always agree with each other on what to do. And if enough people decide to vote against Democrats in the next election, then they will lose power. In a republic like the United States, no party can do whatever they want. All politicians have to argue, compromise, and make deals with each other to get things done. They have to answer to the people and take responsibility for their mistakes.

The USA's large cultural, economic, and military influence has made the foreign policy of the United States, or relations with other countries, an especially important topic in American politics, and the politics of many other countries. 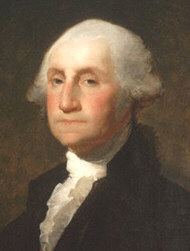 The country grew from East to West. It conquered and bought lands.

The United States also consists of several other lands that are not states. Most of these are colonial territories, and are not a part of the Mainland U.S. Some examples are:

The United States also includes one federal district that was split from a state:

The Philippines (islands) was once a possession of the United States. Palau, the Federated States of Micronesia, and other Pacific island nations were once governed by the United States as a United Nations "Trust Territory", but are now independent.

The U.S. military has bases in many countries. The U.S. Naval base at Guantanamo Bay was rented from Cuba, even after that country had a Communist revolution.

The United States is the third biggest country in the world. Only Russia and Canada are bigger. Its geography varies a lot and includes:

The climate varies along with the geography, from tropical (hot and wet in summer, warm and dry in winter) in Florida to tundra (cold all year) in Alaska. Large parts of the country have warm summers and cold winters. Some parts of the United States, like parts of California, have a Mediterranean climate.

The United States has a capitalist economy. The country has rich mineral resources, with many gold, coal and uranium deposits. Farming makes the country among the top producers of, among others, corn (maize), wheat, sugar and tobacco. American produces cars, airplanes and electronics. About 3/4 of Americans work in the service industry.

The top 15 trading partners in terms of total trade are:

The United States of America has people of many different race and ethnic backgrounds. 80% of the people in the United States descend from European immigrants. Many people are descended from Germany, England, Scotland, Ireland, Africa, and Italy.[11] 13% of the people in the United States are African-American. Most of them descend from the African slaves that were brought to America. Asian-Americans make up only 5% of the population in America but make up a bigger portion in the west coast. For example in California, Asian-Americans make up 13% of the population of that state. Hispanic-Americans or people of Latin origins make up 15% of the nation. The original peoples, called Native American or American Indians and Inuit (Eskimos) are a very small group.

11% of the people in the United States are foreign born. 18% speak a language other than English at home. For people 25 and older, 80% are high school graduates while 25% have a bachelor's degree or higher.

Native American religions included various animistic practices, including reverence for nature and spirits. There are many different religions in the U.S. Statistically, the largest religion is Christianity, including groups such as Catholicism, Protestantism and Mormonism. Other religions include Hinduism, Islam, Judaism, Unitarian Universalism, Wicca, Druidry, Baha'i, Raelism, Zoroastrianism, Taoism and Jainism.[13] Religions which were founded within the United States include Eckankar, Satanism and Scientology.

The United States is one of the most religious countries in the Western World, and most Americans believe in God. The number of Christians in the U.S. has gone down. 86.2% called themselves Christian in 1990 and 78.4% said this in 2007. The others include Judaism (1.7%), Islam (0.8%), Buddhism (0.7%), Hinduism (0.4%), and Unitarian Universalism (0.3%). Those who have no religion are at 16.1%. There is a large difference between those who say that they belong to a religion and those who are members of a religious body of that religion.[14]

Doubts about the existence of a God, gods or goddesses are higher among young people. Among the non-religious population of the U.S., there are deists, humanists, ignotic, atheists, and agnostics.[15]

American popular culture goes out to many places in the world. It has a large influence on most of the world, especially the Western world. American music is heard all over the world, and American movies and television shows can be seen in most countries.

The American flag is made up of 50 stars on a blue background, and has 13 stripes, seven red and six white. It is one of many symbols of the United States like the Bald Eagle. The 50 stars represent the 50 states. The red stands for courage. The blue stands for justice. The white represents peace and cleanness. The 13 stripes represent the 13 original colonies.[18] 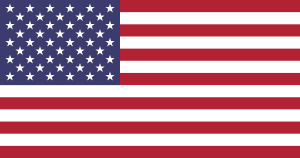